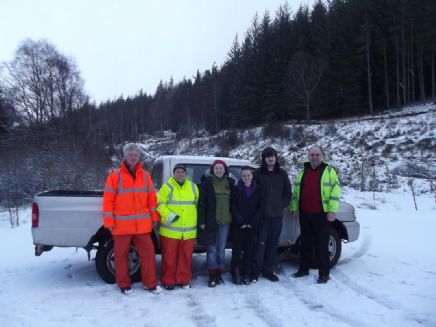 2013 has seen the team of staff at Laggan Forest Trust more than double. The existing team of three, who had been focusing on development of The Laggan Forest Trust towards the creation of a Forest Centre at their Strathmashie base, have been joined by four new colleagues in recent months.
The Development Team originally comprised of Development Manager, Robin Jackson, Operations Manager Sandra Grant, and Projects Officer Iona Malcolm.

Sixteen year old Ronan Simpson was the first of the new recruits, and joined LFT as a Community Recreation Assistant through the Community Jobs Scheme.  He is working with Operations Manager Sandra Grant on the smooth running of the Forest Trust and servicing of Board business and correspondence.

Next to arrive were Wood-fuel and Path-building Operatives Barbra Cooper and Trevor Jack, who are currently training in the skills needed to set up and run the two new social enterprises, and will soon be out maintaining paths, and processing and selling firewood. In these early months this work is being funded by The Scottish Government’s Enterprise Growth Scheme, but the enterprise has the aim of quickly becoming self-sufficient.

Last, but not least is Community Recreation Assistant Amy Styles, who joins LFT through The Natural Communities Programme from The Conservation Volunteers. Amy will be assisting Projects Officer Iona in running community events and activities throughout the year, and will also be volunteering with partner organisations Scottish Natural Heritage and The Highland Council.

Laggan Forest Trust would like to thank the following organisations for their support:
Awards for All
Leader
The European Agriculture fund for Rural Development. Europe investing in rural areas
Highlands and Islands Enterprise
The Scottish Government
Forestry Commission
Cairngorms National Park Authority
The Highland Council
The Robertson Trust